It all started around early 2007, possibly earlier "said Nawar", but this wasn't just about writing some songs to go on an album, it was more about really getting deep into writing and actually making something unique,

Contrary to popular beliefe, having your own studio does not always mean that you get to have all the fun you want, i actually found it to be extremely tedious and at times exhausting; However, Jadi-Anne will tell that it is because i became extremely fussy about what i'm doing..

That can sometimes be a good thing, because you strive at doing nothing but your absolute best, and you ultimately become proficient, comfortable and efficient at making the most of the your whatever little time you have.

During the writing and recording of "Perfectly Strange", Our studio became the centre of operations and inspiration, as we spent hours and days in and out working on arrangements and ideas, until somewhere along the way we started to see "and hear" a certain pattern in the writing and producing process emerging, it wasn't a big deal at the start, but that was because Nawar can literally walk in and 4-5 hours later come out with a fully written/recorded and roughly mixed track, with Guitars, string/choir arrangements, drums, bass, solos all done and ready for vocal tracking, so he wasn't really being methodical about what he was doing, just how it was done, and in time we could clearly notice how the songs started to take on a direction,

"It made us better song writers, and better performers, as we were constantly going with what worked best for each track, there was no room for showing off or standing out, it was literally about the delivery, the way the song made you feel afterwards. The writing process itself is not fixed, we didn't start with an intro, or a first verse on most songs, it was left to pure inspiration and emotion, and that left us with less restrictions and more freedom in going with the flow and seeing where it takes us". 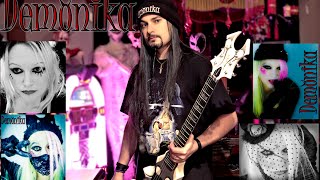 Doing it all over.